Skip to main content
Car Freeday Merdeka, Bandung, Indonesia – Travel Destinations.
Bandung residents now can get a little pride, for 4 hours in a week has Jl. Dago and Jl. Merdeka without fear of competing with motor vehicles. Because every day of the week starting at 6 am
till 10 am on the road from the intersection of Jl. Merdeka. R.E. Inhale up to the front of Merdeka Elementary School into a car-free area, and only intended for people to exercise, creative arts, walking or traveling.

This opportunity is exploited people in Bandung, in addition to exercise and sightseeing, socializing as well as a variety of artistic performances both modern and traditional. 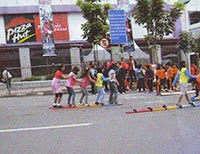 If we want to go to Car free day and driving, you do not worry about the parking problem because, according to information from the Department of Transportation Bandung, has prepared three locations, namely the parking lot at City Hall Bandung (precisely in front of Revenue Office), in front of Hyatt Hotel, and in Jln. Sumatra (Santa Angela).