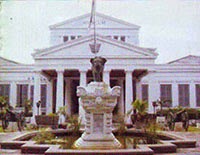 was built in 1864 to be completed in 1867. During construction Pakuan (1864-1867), has deployed a number of members of the Dutch Militair Genie, who is assisted by RA Wiranatakusumah known as Dalem Bintang.
RA Wiranatakusumah is the 8th generation Bandung Regent who ruled between the years 1846-1874. He mobilized residents from Babakan Bogor (now Kebun Kawung) and Balubur Hilir which is now located in front of the official residence Siliwangi military commander in Bandung.

For the services, the people involved in the construction are exempt from paying taxes.
Pakuan have Indische Empire Stijl architectural style, graceful monumental and highly favored by the General Herman Willem Daendels. The building was designed by the engineer Repaid from the Department Openbare Werken van Burgerlijke (BOW) or DPU now, which is the staff of the Resident Van der Moore, the engineer which is also designed the
other buildings “Sakola Raja is currently as a Polwiltabes Office (Police Station) established in 1866.