A timeless story that occurred in year 1946 in the month of March, the true story of the heroic tragedy of the people of Bandung are remembered and known as the Bandung Ocean of Fire, the Indonesian people struggle against the occupation. Kosasih Ardiwinata Daeng, one of the witnesses at the same tragedy Heroes Bandung lake of fire. According to him “then Bandung was given to colonial better burned “, it also has been thought of by the people of Bandung, and therefore the people and the army Siliwangi simultaneously burn everything in Bandung, houses and other physical objects, the mass of Cibeunying to Kopo, about the way Arjuna to Pagarsih Situ Aksan , so the colonial did not dare to enter the city, just after the people, civil government and police out of from the city, they dare to enter Bandung. It has been determined exactly at 12 o’clock at night began to burn the buildings and all residents have had to leave Bandung, as inexperienced and tense, they put dynamite wrong and inappropriate at a predetermined time, Very large explosion on a square edge Bank , the people who heard began to burn his houses  while Siliwangi troop blow up more than 10 other large buildings with bombs, including Bank Indonesia building. 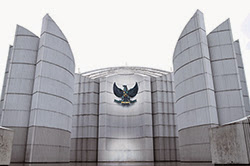