Skip to main content
If you want to have a culinary experience in a scary place, you don’t need to go far away to find such a place. Bandung has an eatery where you feel like you are in a zombie land. The eatery is called Zombie Resto and Cafe.
Let’ s see how scary the restaurant is.
Zombie Resto and Cafe is locate inside an old Building on Braga Streeet No.3, Can accommodate up to 150 people.

The lights are dimmed, apparently in order to create a scary atmosphere inside the Restaurant, while visitor are entertained with the background music reminiscent of horror movies.
and you may get shocked when you are served with the eye-shape pudding as dessert.

Zombie Entrecote Legion of the Nlght, which consists of roasted steak covered with mushroom sauce, served with vegetables and deep fried potato; and a traditional food called Traditional Fried Duck Resident Evil, which consists of fried duck served with rice, plecing (slight boiled water spinach), emping (a kind of crackers) and chili sauce.
Zombie Resto and Cafe has a total of 40 items on its menu list, including appetizer, main course and dessert.
The Restaurant offer more than 40 types of bevereges, ranging from soft drinks to alcoholic drinks at its Martini Bar.
“As far as foods are concerned, we are exploring Mexican food such as Fajitas and South American burgers.
With regards drinks, aside from soft drinks, They offer alcoholic drinks such as cocktail There hasn’t been much exploration into cocktail in Bandung. 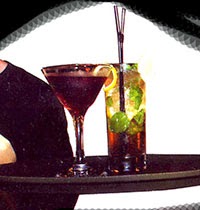 The reason why the restaurant/cafe choose the Zombie theme, The idea is to make people curious and want to try.
Zombie Resto and Cafe become a favorite hangout for people corning to Bandung, During working days, all waiters are dressed in black, while inside the restaurant the tights are turned down. While eating or drinking guests may listen to background music selected from zombie movies or watch zombie movies,”
Besides, Zombie Resto and Cafe also has a facility called Ghost House, where people can see a number of zombie effigies. Upon entering the facility, people will immediately smell the aroma of jasmine flower (which is associated with the presence of ghost in Indonesia).
The facility is equipped with a high-capacity AC system that anyone will feel so cold inside.
People with heart disease or in pregnancy are not allowed to enter the Ghost House.