Skip to main content
Bandung is known as a “creative city”
A testament to the creativity of the Bandung people is Saung Angklung Udjo, one of the popular cultural centers in the city.
It is the place where tourists can enjoy the famous angklung performance.
Angklung, a Sundanese traditional musical instrument, is made of two bamboo tubes attached to a bamboo frame.
The tubes are carved to have a resonant pitch when struck and are tuned to octaves.
The base of the frame is held in one hand, whilst the other hand strikes the instrument. This causes a repeating note to sound. Each of three or more performers in an angklung ensemble plays just one note or more, but altogether complete melodies are produced.

Angklung was declared by UNESCO in 2010 as a world cultural heritage from West Java.
People will hear the melodious sounds of angklung soon after they arrive at the gate of Saung Angklung Udjo.

It is here a man called Udjo Ngalagena, affectionately called Udjo, together with his wife Uum Sumiati set up a Sudanese art community back in 1966. 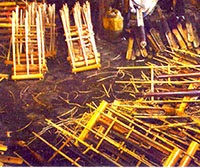 The community then developed the place into a respected cultural center and named it Saung Angklung Udjo after the founder.
The interior of the venue is decorated with bamboo handicraft, reflecting the harmony between culture and nature.
During each show, the angklung ensemble, accompanied by dancers playing West Java ethnic dances, performs a number of tunes, including the western legendary pop songs such as Bohemian Rhapsody of Queen and We Are the World of Michael Jackson. Visitors will be easily amazed by the musical performance.  The announcer of the show speaks in both Bahasa and English. 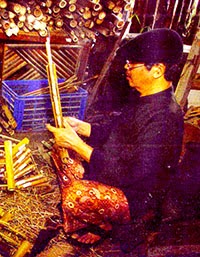 Saung Angklung Udjo also has a gallery where visitors can buy gifts; and a workshop where they can see firsthand the process of making angklung.
The angklung ensemble show is held daily from 3.30 p.m. through 5.30 p.m. The entrance fee is Rp 50,000 per person.
The entrance fee includes a free angklung as gift and a short course on playing the instrument.
Most travel guides include Saung Angklung Udjo in their itinerary for tourists thanks to the popularity of the place as a cultural icon of the city.
The cultural center has often sent its angklung ensemble to
play in various locations in Bandung and outside the country.
The ensemble broke the Guinness World Records by playing a total of 5000 angklungs during a show involving people from various countries in Washington DC in 2011.
He called on the Bandung people to be proud of their culture and preserve it.

How To Get There :
Saung Angklung Udjo is located on Jl. Padasuka 118 East Bandung.
To reach the location, you should drive from Cipularang to Cicaheum terminal.
Padasuka Street is situated around 100 meters from the terminal. You may also go there using the public transportation that serves the Cicaheum-Ciroyom route.
The minibus will drop you at the end of Padasuka Street. Saung Angklung Udjo is located around 500 meters from the end of the street.