Skip to main content
In Bandung, there’s a villages that could be your weekend  getaway destination. The village is famous as the hometown of reliable painter, puppeteers and  and  the green of natural charm of the place.
The village located in the district Bale endah, Bandung Regency, West Java. Its called Jelekong Village.
Entering the main street in the Jekekong  village , your eyes will be immediately drawn to the hundreds canvasdried on either side of the road. There are about 20 galleries along the village road. The combination of soft colors up to striking rhythm smell  of wet paint asthe perfect place for lovers of art.  In  about 600 reliable painter selling art will allow artlovers to seekand obtain the desired paintings just by going to area only. 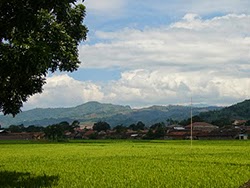 Villagers Jelekong has the expertise to make rural panoramic painting, horse racing, fruits, carriage, koi Fishes, or cockfighting.
Nearly half of the population support his family from paintings, they market it to Semarang, Bogor, Bandung, Bali, Malaysia, Saudi Arabia, and even some galleries and shops of paintings in Bandung was filled with the creation reliable painter from Jelekong Village, they sell them at high prices.


Village residents expertise in painting inheritedfrom generation to generation by an artist named Mr. Odin Rohidin, until now carried out continuously as one ofthe joint lives of the villagers . At least 200 households in the village managed to raise the standard of living with their expertise. Although mass produced, the painting  still attract tourists. The price is cheap, unlike the famous artist paintingswich is reach a millions of rupiah.
For the landscape painting on canvas measuring 135cm x 40 cmprice is IDR.150.000. up to the millions of rupiah, depending on a large painting, the paint used, up to the level of difficulty.
In Bandung you canbuy this residentswork in the center of Bandung, precisely inthe region of Braga street. On theroad along the 700 meters, the painting streetvendors lined up to gallery famous paintings, such as street art gallery.
For the sake of subsistence, the taste of art successfullycollaborated with industry to follow the tastes of the market.
The Village is one of the villages that has a traditional house and art that will amaze you,  similar to Ubud in Bali became Painter  artist warehouse.
Jelekong Village also famous for the  puppet artist, as well as a number of other arts such as Sisingaan (traditional dance), Jaipongan (traditional dance), Pencak Silat martial arts, Sundanese  food  and more.
Special art of puppetry culture, from where it has spawned puppeteers Mr. Sunarya descent, one of well-known is The deceased Asep Sunandar Sunarya. Ifyou want to see Puppeteers in action then you can visit Giriharja Village . Its location is not farfrom the village office, which is about 500 metersfrom the village office.
No wonder Bandung district government set thisvillage as fromthe nine tourist village in the region. Preciselyin 2011, the village of Jelekong defined asthe Village of Arts and Culture.  As a result, writing Arts Village was officially pinned on the gate towards the village.
If you’d like to see more pictures about Jelekong Village on Pinterest