The Residents of Bandung are quite proud with the Gouvernement Bedrijven building, or better known here as Gedung Sate building because of its historical value. Built on July 27, 1920 by the Dutch Colonial government, the Building now houses the West Java provincial administration.

But it’s not only for historical sentiment. The building has a tower, which offers a majestic view of Bandung from four directions,and a Museum displaying old photos of the construction of the Building, historical items, Dining room of the then Colonial Administration, and it’s popular Coffee Terrace.

We recently enjoyed the sensation of being atop the Gedung Sate building during a visit. as we entered Gedung Sate, we approached the security post to get an entry permit and fill in the guest book. We were accompanied by a special guide at the building to tour the facility, climbing to the tower at the fourth floor of the building via a lift which has a capacity of six persons. There is an alternative wooden stairs to reach the tower which has an exhibition room for historical materials.

As we reached the fourth floor, we stepped out of the lift to a quite fascinating, unique large room, which turns out to be the museum displaying old photos of development activities in West Java Province, dioramas, statues, West Java traditional weapons, and traditional music instruments, all of which could be enjoyed by both domestic and foreign visitors.
The Guide accompanied us to tour the rooms on the fourth floor of the building.

After completing the tour of the museum, the guide, who has been working at Gedung Sate for 20 years, asked us to move upstairs to an outdoor platform called The terrace was designed to resemble a popular cafe in Paris at the time.
Just like any other cafes, the terrace is equipped with chairs, tables, and tents for relaxing, while enjoying the fresh and cool air of Bandung.. From here, visitors can enjoy the beautiful scenery of the city including its icons, The Gasibu field and the West Java war monument. In fact, some areas outside the city can be clearly viewed from here.
“In the past, the Gedung Sate Building was used by the Dutch administration to entertain guests, drinking coffee while enjoying the beautiful landscape of Bandung from the tower,” he recalled.
“Today, the Gedung Sate tower is still use to treat the guests of the governor(of West Java),” he added.
Going up another ten steps, we reached the dining room part of the tower, today use by the governor to treat his guests for dinner. The dining room is in fact also used to entertain foreign state guests, and some times as a venue for the governor to hold meetings.
We noticed there were about 40 seats and 10 tables in the dining room. From inside the glass wall room, we can easily view the scenery of Bandung, surrounded by mountains in the North, South and East.

“Domestic and foreign tourists are allowed to go up to the tower to enjoy the beautiful scenery of Bandung from the top,” He said. Foreign tourists visiting the Gedung Sate building mostly come from the Netherlands, Japan, and China who are quite interested in learning the history of the building and enjoying its interior, while eagerly taking pictures.
“The Gedung Sate building is owned by the people of Bandung, so the public must be able to enjoy it. But to be allowed to go to the tower, there is a procedure including filling in the guest book, showing your identity card at the security post at the entrance gate of Gedung Sate, For group of school children, the school normally first makes official letter to request for a visit.” 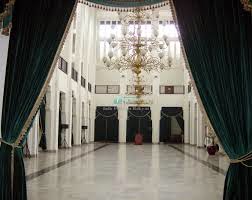 Theres a siren device, which is already hundreds of years old but still work because of proper maintenance, located in the middle of the dining room.
“During the Dutch administration, the device is used to make a warning sound in case of attack by independence guerillas or when earthquake occurred. During the time, the siren sound could be heard as far as 20 Km away.
Today, it can only be heard as far as 2 Km away. The siren is now usually sounded during Independence Day on August 17,”
Gedung Sate tower during the Colonial period was the tallest building in Bandung. then colonial administration banned the construction of new buildings higher than Gedung Sate.

After completing the tour of the tower, we decided to go down back to the lobby via the stairs. While stepping down the old wooden stairs, my imagination was taken back to the old Dutch colonial era, a feeling probably aroused by the old, yet solid, wood material of the stairs, the narrow hallway with walls which are still original There’s no sufficient Light in the stairways as it was only lit by sunlight leaks. 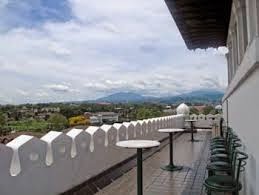