Skip to main content
Mushrooming Hotel Building  In Cihampelas – Bandung.
Cihampelas Street, which was famously known as Jeans Street, has now become a favorite investment destination for hoteliers eager to capitalize on Bandung’s booming tourism industry.
Approximatelly a total of 13 hotels have been built on Cihampelas Street over the past two years, making it now one of the streets with most hotels in the city.including the next street to it Ciumbuleuit street with some apartment and about 7 Hotels and Guest Houses there.

many visitors choose to stay in hotels on Cihampelas Street (for visitor who like quiet atmosphere they prefer to stay in some of the Hotel or Guest Houses in Ciumbuleuit street) due to their proximity to the numerous shops that sell quality but affordable products.
The occupancy rate of hotels on Cihampelas Street reach 75 percent monthly. During the weekends, the occupancy rate rises to 95 percent.

In line with the development of Cihampelas as a shopping destination, many hotels have been built on the street to provide comforts for travelers wishing to shop in the area. the number of hotel business Will continue to grow on the street in line with the increasing popularity of Bandung as tourist destination.
There are already many hotels on the street, and its predict more hotels and Apartement Will be built there in the future.
Visitors may choose star hotels which set tariff at more than Rp 1 million per night, or budget hotels which charge costumers Rp 250,000 per night.
Cihampelas has been long known as one of the best shopping destination in Bandung.
In the past, most shops there sold jeans, which was why it was called Jeans street. But, the image of the area has changed over the past decade thanks to the opening of new shops which also sell all other types of apparels aside from jeans.
Old shops which were specialized in jeans have followed suit, now offering customers a richer collection of clothing products. Visitors love to shop there because the products are mostly of export quality and offered at affordable prices.
One thing that makes shops on Cihampelas Street look unique compared to those elsewhere in the city is that many of the shop are adorned with huge statues of superhero movie characters such as Spiderman, Batman, Rambo and Aladdin. The statues have become a tourist attraction.
Cihampelas is also home to numerous restaurants and tourist gift shops. there are a total of 59 business units operating on Cihampelas Street, mostly setting apparels and foods. The former image of the street as the center of jeans street survives as stores there still sell jeans aside from other types of clothes.
Hotel business on Cihampelas and surrounding that area has the potentials to continue growing fast in the future due to the close proximity of the street to the Husein Sastranegara airport. 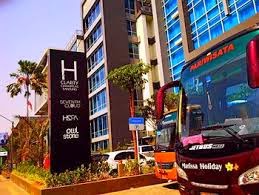 The popularity of Cihampelas as a tourist destination has an unpleasant consequence though, namely traffic congestion. The situation has worsened due to the fact that there are few parking lots available on the area.
The street is narrow, while cars always come in droves. A parking lot center which can accommodate a large number of cars should have been built near the area in order to solve the traffic problem on the street.
We advise visitors not to go to Cihampelas using own vehicles, due to the lack of parking lots and the presence of numerous small-scale vendors along both sides of the street.