At a Glance Luwak Coffee Cikole

This place is a breeding center of mongoose (Luwak), Luwak-coffee production as well as home-themed Education, located on the slopes of Mount Tangkuban Perahu, precisely on Nyalindung street No. 19, the ward Babakan, Cikole village, Lembang, Bandung. Luwak is maintained at this point follow the principles and rules of animal welfare, which aspects of health and nutritional needs and nutrition, of mongoose are concerned. Dozens Luwak results of breeding by They team, produce Luwak coffee called Luwak Coffee Cikole.

In this place also provided a cafe for visitors who will be tasting a cup of Luwak coffee. However, this point applies an unwritten rule that visitors are prohibited from drinking Luwak coffee before knowing how and production processes. Every visitor who comes will get a clear explanation from the teams ‘educator’ on how the production of Luwak-Coffee Cikole, and taken to see the activities of the production process directly. Before enjoying the Luwak coffee products, coffee lovers candidate who came pampered in a relaxed atmosphere and comfortable to interact, play and take pictures along with the mongoose in this location. 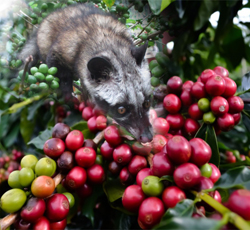 This place is also often used by pupils, students and academics from the city of Bandung and other major cities in Indonesia to learn about animal breeding of mongoose, Luwak coffee production methods, as well as Luwak coffee business practices, and more.
Luwak Coffee Cikole production houses produce one hundred percent original Luwak-Coffee, also produces innovative products such as Kopi Luwak Stamina contains a combination of Luwak coffee and a couple of other efficacious herbal substances. This stamina Luwak coffee products, is the first and perhaps the only one in Indonesia. In a nuanced landscape of cool, airy, comfortable and beautiful typical of Priangan (Sundanese land) is very suitable to get all sorts of inspiration in the mood of serene and peaceful. That is, a place that is unique and attractive tourist has been visited by more than fifty countries simply to enjoy the delights of a typical Kopi Luwak Cikole.
History And Background Of Coffee Luwak Cikole
Starting from a strong desire of a veterinarian in the city of Bandung, the founder and owner of Kopi Luwak Cikole Mr. Sugeng Pujiono, to examine Luwak or civet that supposedly can ‘produce’ special coffee called Luwak coffee. In January 2012, starting with 10 animals maintain the mongoose, a captive in a cage measuring 2 x 4 meters for each animal. This is where the research began. Luwak is treated exclusively with the aspect of animal welfare or animal welfare careful observation related to habitat and habits, diets, estrus cycle, marriage patterns, to disease and preventive efforts. Other research concerns the mechanisms of cells in the digestive tract of animals that can break down the content of some chemical elements in the coffee fruit, resulting, special coffee beans.
Coffee Luwak Cikole officially further form to be a business entity in January 2013. Engaged in the production of Luwak-coffee business with brands Luwak-Coffee Cikole, processed in Production House Kopi Luwak Cikole. currently Luwak coffee house production Cikole has 200 animals the mongoose in captivity, located in Kampung Babakan, Cikole village, Lembang, Bandung.

A little story from owner

Sugeng Pujiono, owner of Kopi Luwak Cikole, Member of the Association of Indonesian Kopi Luwak is telling, since starting his business four years ago, he now has customers from Southeast Asia, the Middle East, to Europe.
“Tourists foreign countries ranging from ASEAN, the Middle East, to Europe used to come here”. We are always out of stock. If followed, the demand to 600 kg of beans per month. But I only producing 50 kg per month,” said the veterinarian from the University of Airlangga.
Sugeng admitted despite many requests, he was not eager to meet market demand. According to aspects of animal welfare  be overlooked. If you want to meet the demand, the consequences of mongoose coffee should eat more, and increase the number of mongoose reach 2 times the number held today. He is more focused on the satisfaction of customers through the best quality of every grain of coffee. “Businesses Luwak coffee capital trust or confidence. When customers already believe, will come on. I keep every coffee beans remain safe, hygienic, high quality, nutritious, and his mongoose also prosperous,” he explained.
“There are often customers from Singapore. When asked they said purposely plane from Singapore-Jakarta and then take a train to Bandung, continued to take a taxi to this place. Later that night back to Singapore again. Just to drink coffee,” said Sugeng.
Sugeng supplying relatively affordable price for a cup of Luwak coffee. A cup of coffee at Kopi Luwak Resto Cikole rewarded IDR 50,000.
Each month, 100-200 people visited the site and cafés captivity. In addition to coffee, tourists can be invited to an educational tour locations Breeding Center and Education Center Kopi Luwak Cikole.
The products offered are original Luwak coffee Cikole IDR 50,000 per 10 gram. In addition there Luwak coffee product innovation Stamina ‘Serichie’ which sold for IDR 50,000 per 10 gram. Luwak coffee’s Sugeng blends have properties that are good for the body’s metabolism, protect teeth, prevent diabetes, and safe for patients with gastritis.
Development Research
Research continues to be developed, concerning the type, variety, quality and quantity of main meals and snacks are optimal for the animals the mongoose. Simulation continues to be developed, from the handling of the coffee bean issued by Luwak, the length of drying coffee beans with hot sun and dry wind, the parchment skin stripping technique coffee beans, sorting coffee beans for production, and long roasting temperature, and others. It can take up to a year for the entire research process.

To enjoy a culinary tour Luwak coffee Cikole Lembang, Bandung, You could come by following this road map.

What are you waiting for? If you do not know where to start from, try a cup of Kopi Luwak typical Cikole of Priangan (Sundanese land) Bandung.