Siliwangi Waterfalls located in the area of ecotourism in the complex of Puntang Mount Gunung Malabar, managed by BKPH Banjaran, Bandung KPH South. The natural attractions are located at an altitude of 1290 m above sea level, with the configuration of the field in general bumpy with air temperatures of 18 to 23 degrees Celsius and rainfall of 2,000 to 2,500 mm / year. Curug Siliwangi water waterfall has a height of about 100 m.
Situated in South Bandung, precisely in the Village Cimaung, District Banjaran, Bandung regency, West Java province.
Map and GPS coordinates: 7 ° 7 ‘40.00 “S 107 ° 38’ 12:29” E 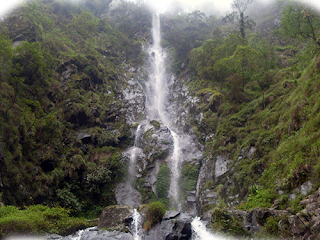 Mount Puntang air is very cold. So, if you want to visit here should you use thick clothing such as sweaters or jackets.
tourist area is well known as an area for adventurous travelers views from its location ideal for camping. In addition, this region is also known to the tourist area of history, because it used in 1919, this place is the first biggest radio station in Asia led by Dr. Ir. C. J. de Groot.

Siliwangi Waterfalls supposedly occurred when the boy who eventually became known as the King Siliwangi, urinating from the top of Mount Reregan. And because urine the King, then this is the place that is considered the most sacred than Cipangubusan or sacred water sources, Geger Hanjuang where the King spent the break and Stone Sword place where he stores his favorite sword.

Located about 30 km from the city of Bandung to the south. Natural tourist area of Mount Puntang, Siliwangi Waterfalls is located approximately 3.5 km (with a travel time of about 2 hours drive) to down a path which is quite steep and crossing some river that divides the road (without the bridge).
To reach this location is not so difficult, but can be reached by
use of private vehicles, can also be reached by public transport. From Terminal Kebon Kalapa bus ride to PANGALENGAN, down in the area Cimaung, then continued using angdes or motorcycle taxi to the location. It could also be from Terminal Tegalega (direction M.Toha) or Buah Batu (Dayeuh Kolot direction), taking public transportation to Banjaran, followed by public transport to the site. In addition, it also can be reached from the terminal Leuwipanjang (direction Soreang). to Banjaran or take a bus to PANGALENGAN.
For those who bring their own vehicle, from Bandung city center can be through Soreang or Buah Batu. When through Buah Batu follow Highway Mohamad Toha through Dayeuh Kolot, past Terminal Banjaran. These districts of the city, a distance of approximately five kilometers reached the intersection Cimaung. The thing to remember, do not remove the view to the left, so you can easily see the signs to the location.
Facilities and Accommodation
The facilities there include: Campgrounds Mount Puntang area of 5 ha, large vehicle parking, public toilet, mosque and several cafes which provide a variety of snacks. Also in this area is available accommodation in the form of a pavilion a few huts for a break or stay for visitors who do not bring camping equipment.
Entrance to this area is Rp 5,000 per person.