Pawon cave, located in west Bandung, Padalarang. the exact location is in the Village of Mount Masigit, District Cipatat, Padalarang, West Bandung regency, about 25 km west of the city of Bandung. Bandung highland region, its position located approximately 601 meters above sea level. Current location is right in the area around the mining of limestone Padalarang, but this Bandung’s natural attractions, right on the hilltop Pawon. In ancient times, according to research experts, this place is one of the banks of Lake Bandung Purba, which water vanished, in a location of Sanghyang tikoro Bandung. Gua Pawon (Pawon cave) Padalarang in the west Bandung has a length of about 38 meters with a width of 16 meters, but how high the roof of the cave has not been established in detail, as the first time, this tourist spot found by the experts, the roof of the Pawon cave is already in a state of collapsed. 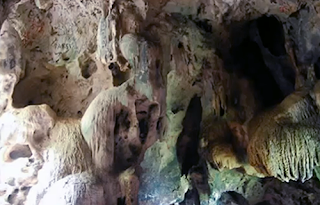 When we bit go into the Pawon Cave, we will see the floors left only a small part, and that we can see on the west side of the cave, because floor of the pawon cave middle part was destroyed and buried by chunks of debris roof and most of eroded to form a fairly steep slope. one of the historical attractions in Bandung in the form of cave over 300 square meters consists of several cavities or parts of the cave, when you come here, you will find some room, as well as some natural window fairly sizeable.
Pawon cave in the village of Mount Masigit Cipatat Padalarang districts west Bandung itself, is the first location discovered ancient human skeleton, and why are they called Gua Pawon because the location of findings the human skeleton in a cave karst located on the cliff side of Mount Masigit karst hills. While the word “pawon” itself in Sundanese means kitchen

History Of The Pawon Cave 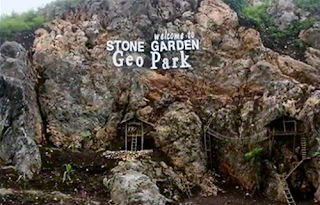 According to the findings of the experts in the form of research results as well as site surveys between 1930 to 1935, which among others is done by A.C. De Yong and G.H.R. Koenigswald, in Pawon cave was discovered tools of cultural relics of the past from the time Preneolitik with obsidian materials, kalsidon, quartzite, chert and andesite in the form of arrows, stone bracelets, shaved, grindstones until the knife. While the results of excavations in 2003 and 2004, in the Sunda historical sights in Bandung have discovered various forms of artifacts such as pottery shards, spatula, pottery, and the rest of the jewelry made of animal teeth and tooth fish that characterize the existence of the historic site in the past. And these results are very clear that the Pawon Cave western Bandung Padalarang was once used as a natural home or shelter by Pawon Cave man especially in prehistoric times in the past.
Archaeological sites, such as finding a human ancient Pawon Cave skeleton discovered were right on the north side of the cave and is now fenced off for the sake of rescue of cultural heritage and history. At that location we will see the boulders in the form of a figure crouched human bone, but it’s not the original framework of ancient human occupants of Pawon Cave but a replica of the skeleton. Because the original frame has been moved to the office of Bandung Institute of Archaeology in Cileunyi area, it is also only a skull and jaw because the rest have been destroyed and is brittle with age.

Based on the findings of experts, physical characteristics pawon caveman is especially skulls, certainly including the Mongoloid race. From the results of the last eskskavasi found the remains of the skeleton representing the four individuals, and be numbered RI, RII, RIII and RIV. Skeletons representing different cultural periods. The aging is done based on the elements carbon (carbon dating), “Man Pawon Cave ” The life span of years between 5600-9500 ago.

Gua Pawon (Pawon Cave) in Padalarang which includes western Bandung area, for nature lovers and photographer turns often used as a favorite and is also popular as one of the objects of their camera shots for a variety of interests and hobbies. The beauty of the Cave Pawon as Site Garden, due to the location on a hilltop This pawon, has a very exotic beauty with a background in natural scenery around Padalarang Bandung. The combination of contrasting colors green expanse of grass that surrounds the hills with color rocks in beauty has made a beauty of art is priceless, together with historical value that is owned by a hill in Bandung which stores a history quite grand, so attractions in Bandung is also used as cultural heritage and history, and called the hill archaeological sites.

Route road to the Pawon Cave 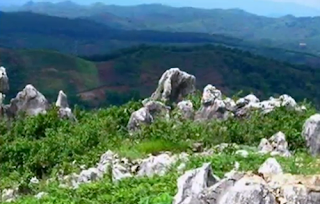 From Bandung to Pawon Cave – from wherever it comes from, if you use a private vehicle or rental, entrance to the toll Padaleunyi, then exit at the toll booth Padalarang, after exiting toll, take the direction towards Cianjur and Sukabumi road. Next, you just need to follow these roads, then if many find signs of road traffic with the notification path will meander a sign that you will soon be at the gates of the village which is the access road to the tourist attractions Gua Pawon, little tips on the tour, you must be observant or by lowering the rate of speed of your vehicle as well as careful attention to where Gates are due the billboard Pawon cave tour itself is not too big.
As a benchmark might be better to consider is the Gate “Welcome” are to the location of the Pawon Cave. When it entered the gates of “welcome” then you just follow the direction of the road which is already quite good enough to your place of purchase admission tickets.
From Jakarta to Pawon Cave, it is not so difficult and does not require a large fee. you just get on the bus to Bandung, Bogor or Cianjur, which passes Padalarang direction. After going down in the area Padalarang, you just continue the journey towards Citatah to find in a side street there is a signpost that reads ’Situs Sejarah Gua Pawon’ (‘Historic Site Pawon Cave’). If you did not know this area, you can ask the driver of your vehicle was traveling. From where you see the signpost “Historical Site Pawon Cave”, you have to go on a little longer, can be a way to ride motorcycles at a price of IDR 10,000 or if you want to enjoy the beautiful scenery of the hill pawon caves, then walk a bit is an activity that certainly is better too especially if you come to this place with a group.
Ticket entrance to the Pawon Cave is IDR 5500 / person – Car parking tickets IDR 3000 Motorcycle parking tickets IDR 2000
enjoy your trip Guys , . . . . .